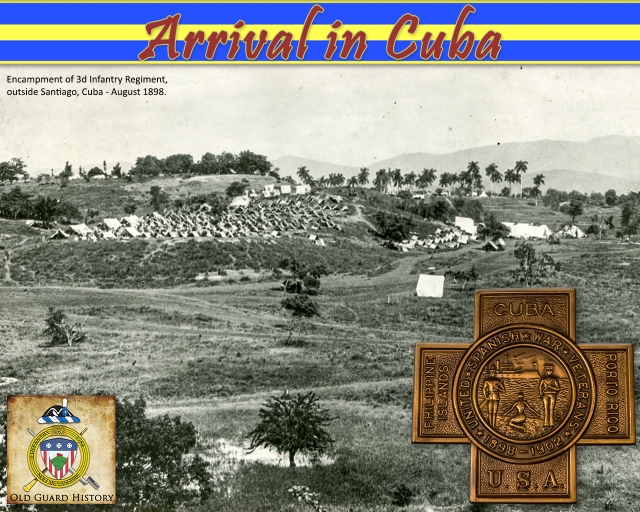 On June 22, 1898, soldiers of the 3d Infantry Regiment arrived in Santiago Harbor, Cuba.

The Regiment started their journey when they departed Fort Snelling, MN by train on April 19. They arrived in Mobile, AL two days later having traveled over 1,400 miles. The Regiment trained in Mobile for six weeks, until it was transferred to Tampa, FL on June 13. Upon reaching Tampa, it was assigned to General Shafter’s force en route to Cuba. Once ashore in Cuba, the Regiment is placed in Brigadier General Bates’ Independent Brigade, and placed in reserve at El Pozo, the Headquarters of the US Army Fifth Corps. By July 1, the Regiment is placed into action as part of the Siege of Santiago. 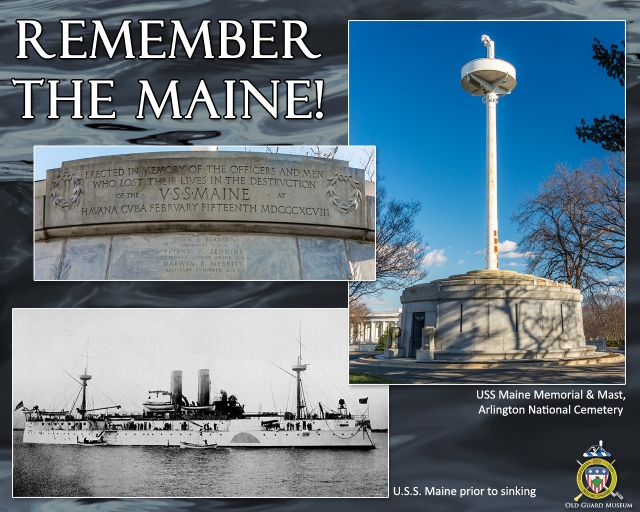 On February 15, 1898, the U.S.S. Maine was docked in Havana Bay, Cuba. It was to be an American presence during the Cuban War for Independence. Later that night, an explosion rocked the ship, killing 266 members of the crew. The explosion, still not solved to this day, launched the United States into the War with Spain. Many believed the Spanish were behind the the explosion. It resulted in a declaration of war against Spain on April 25.
The War with Spain sent American troops to the Spanish territories of Cuba, Philippines, Guam and Puerto Rico. Soldiers of the Old Guard departed Ft. Snelling, MN by train and arrived in Mobile, AL en route to Cuba by Army transport ships. In July 1898, the Regiment played a significant part in the Santiago Campaign, enduring tropical heat in woolen uniforms while storming a fortified blockhouse at El Caney that controlled a part of the city’s water supply. It was followed by three days of more or less continuous shelling in trenches before the city until a ceasefire was signed. The war lasted August 1898, when a peace agreement was signed.
Several years later, Congress made arrangements to raise the Maine and inter the remaining dead at Arlington National Cemetery. The memorial, which serves as the final resting place for 165 members of the crew, incorporated the main mast of the Maine. In 1915, President Woodrow Wilson was on hand to dedicate the U.S.S. Maine Mast and Memorial. Currently, the mast and memorial is being restored to its 1915 appearance. 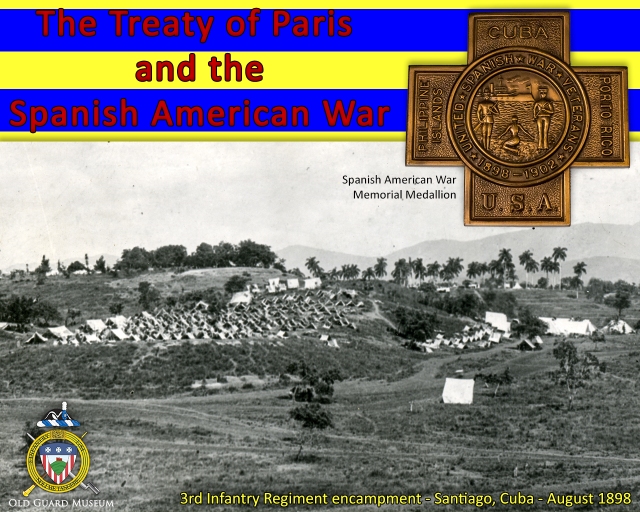 The United States declared war against Spain in April 1898 and was a surprise after a chaotic series of events, to include the sinking of the USS Maine in Havana, Cuba. The country was not prepared. Troops were called to southern areas of the United States and held for training and later transport to Cuba, including the 3rd Infantry which left Fort Snelling in April. The 3rd Infantry Regiment encamped near Mobile, AL until orders came for Cuba. The Regiment disembarked in Cuba in June 1898.

The war was short and sharp, with serious ground combat limited to the American envelopment and siege of the Cuban city of Santiago. In July 1898, the Regiment played a significant part in the Santiago Campaign, enduring tropical heat in woolen uniforms while storming a fortified blockhouse at El Caney that controlled a part of the city’s water supply, followed by three days of more or less continuous shelling in trenches before the city until a ceasefire was signed. After redeploying from Cuba and arriving back in the United States in August, the Regiment was held in quarantine in a camp on Long Island, New York before being allowed to entrain for Minnesota in September 1898. The 3rd Infantry earned the SANTIAGO battle streamer for its role.
On December 10, 1898, negotiations resulted in the Treaty of Paris that ended the War with Spain. In the agreement, Spain ceded Cuba, Puerto Rico and Guam to the United States, and transferred the Philippines to the US for a payment of $20 million. The transfer of the Philippines brought about expectations from Filipino fighters that the US would instantly create an independent Philippine nation. When the US did not, uprisings would send the Old Guard on its next mission as part of the Philippine Insurrection.