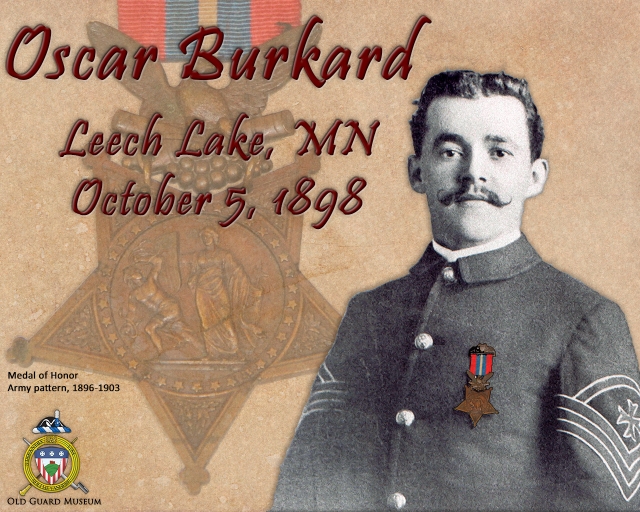 On October 5, 1898, just two weeks after the 3rd Infantry Regiment returned to Fort Snelling, Minnesota from a deployment fighting in Santiago, Cuba during the War with Spain, the Regiment was in the thick of fighting again.A group of Chippewa at the reservation at Leech Lake, Minnesota, were being cheated by local white residents of the revenue derived from the sale of timber on the reservation. An argument ensued, and the local U.S. Marshal was summoned, only to be forcefully ejected from the reservation by the Indians, who were now armed. A company of the 3rd Infantry Regiment was sent to settle the disturbance in October 1898, commanded by Brevet Major James Wilkinson and Lieutenant Tenney Ross, the former a seasoned veteran of the Civil War and campaigns against Indians for thirty years. The Indians kept the company pinned down by well-directed sniper fire for almost three days until it was reinforced. Wilkinson and several of the recruits who had only recently joined the Regiment to fight in Cuba were killed, and ten were wounded. In ministering to the latter, Private Oscar Burkard, a Hospital Corps soldier attached to the Regiment, earned the third Medal of Honor awarded to an Old Guardsman.During the course of the fight, “Private Burkard rescued and tended to several wounded in the action, continuously exposing himself to sniper fire. His award was the last given for actions against hostile Indians.”This action was the last combat between an Army unit and Native Americans.